Summer is nearly over and its’ time to check out preschools in the Danville area. Of course, there are private schools and public schools in Danville, and the public schools have preschool programs, and many of them are quite good. 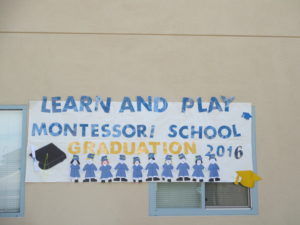 However, one of the big issues is the hours. Private preschools offer better hours. And then there’s the philosophy: our Danville preschool at Learn And Play Montessori is proud of the Montessori approach to teaching. We get children to learn because they develop a love of learning, and this can be amply demonstrated by a public school teacher, Michael Godsey, who wrote an article in March 2015 entitled “Why I’m A Public-School Teacher But A Private-School Parent”.

It is worth repeating the opening paragraph of his – quite lengthy – article: Last week, I observed a high-school English class on a campus without bells. The school didn’t need them: Every student showed up for class promptly, and they remained attentive until the last minute—without packing their books early or lining up at the door. San Luis Obispo Classical Academy (SLOCA) is a private school in Central California that promotes “personal character” and “love of learning,” and the tangible difference between this environment and that at the public high school in the area was stunning to me—even though I’m a veteran public-school teacher. And even though my own daughter is in her second year of preschool at SLOCA.”

Godsey went into great detail about the differences in the classes as he wrote about sitting in a public-school class for 90 minutes with a teacher at a public school who was an expert in his subject, but was constantly interrupted by sharpening of pencils, chatting, someone eating a yoghurt, and a whole lot more. The big difference, he explained, was that the children at the public school were there because they had to be there, while the children at his daughter’s school were there because they wanted to be.

This is why our Danville preschool follows the techniques of Maria Montessori. We give our children freedom of choice. Within reason, they can choose what they do and what subjects interest them, so they learn because they want to learn, rather than having something forced upon them in which they have no interest. The Montessori Method lets the teacher guide the child individually in each subject according to his or her own free choice.

We encourage all parents to come and visit our Danville preschool to see for themselves. We think you will find that the children are motivated and keen to learn, rather than simply having to learn, and this is why the Montessori Method is so successful.