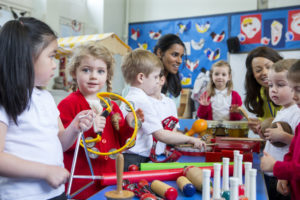 Deciding where your child is going to go to preschool is a big decision. If you’ve been seriously looking into Montessori schools, there’s a chance you have a few questions. Let’s take a look at a few of the most commonly asked questions about Montessori schools.

How Many Students Are in a Montessori Class?
Any Montessori preschool, daycare, kindergarten, or grade school, strive to have small classrooms. This is because the values of the Montessori approach are perceived better in a smaller setting. Day cares for infants and toddlers tend to range from 10 to 15 students. This gives the teacher more of a chance to get to know your child as an individual rather than just one of their pupils. In public schools, the student/teacher ratio was 16.1 in 2013, but in a Montessori school, the ratio is much lower.

How Do Students Learn?
If you’ve been doing some research on Montessori programs you’re probably familiar with the idea that students aren’t given a set schedule, but rather are free to learn on their own. Many people may be questioning how a child is able to learn without any structure, but it’s actually quite helpful. A child that doesn’t follow a curriculum is given the chance to fully understand one concept before moving on to the next. This gives a child a better understanding of what’s going on and allows them to do things on their own.

Why Aren’t Students Graded?
The Montessori approach believes that grades are virtually pointless for a child and their learning. It says that motivation comes from within, rather external reinforcement. Even though grades aren’t assigned through a Montessori approach, the student is observed in terms of their progress and readiness to move on to a new lesson. Most Montessori schools will hold a conference each year for the family so they can see what their child has been doing and hear the teacher’s assessment.

Montessori schools are extremely unique, so parents may have questions about the approach before sending their child to one of their centers. Take a look at three of the most commonly asked questions listed above before sending your child in on their first day.